The spreading of mobile devices in general and iOS-driven in particular, has already become a trend that influences software development preferences. Business owners understand that a new application has to be available via the App Store to increase sales. However, programmers also know that iOS applications are needed and expect to receive a high salary. Here is Staff Augmentation provided by Orange Sputnik helps everyone who wants to reduce spendings, save time for finding the best programmer, and start remote cooperation quickly. We have 8+ years of experience and access to the vast talent pool of Ukrainian developers, which allows coding in only a few weeks after the first contact with managers. What is more, we take care of annoying details like payroll, taxes, work stations, and even retention practices, which makes such kind of cooperation way more effective than outsourcing.

iOS app developers: What these programmers do,
Why needed, and Where to find the best fit?

Which mobile app developer is best?

Why mobile gadgets
is the sphereto focus on?

As the number of internet users increases on a daily basis and about 92% of them use mobile devices to be online, the demand for portative gadgets cannot be overestimated. More than half of all online retail now is made via smartphones and tablets, while Google has already switched its SEO preferences to the mobile-first indexing. All these numbers and facts force to review mobile devices as the major gadgets in the nowadays internet and online retail. That is why iOS, Android, and Windows applications are in high demand and make this programming sphere one of the most perspective.

What should a professional iOS developer know to build an app?

Every respectable software developer has to know more than just only one language, framework or a library, and iOS coders are not an exclusion. Even though C++ can be used to create almost any frontend and backend solution, it’s a too slow way to develop an iOS product, so Swift and Objective-C are the best languages to use for coding Apple products now.

Among the most often used libraries are:

The most widespread UI tools are:

Another important technical aspect for every iOS developer is knowledge of appropriate frameworks, where the leaders are:

There are three major types of mobile applications or operating systems that currently form a market of portative gadgets:

All of them have their benefits in terms of market share, protection, ease of development and more. There are no doubts that if one wants to cover all market and offer a solution for the broadest possible audience, such a startupper has to develop an app on all those OSs.

It is a rather complicated theme to cover it in this article, but one has to understand some key differences. Native developing refers to designing an application for only one OS, which usually leads to better productivity and functionality, but increases time-to-market and cost consuming parameters. Cross-platform and Hybrid programming approaches allow creating a single code and adjusting it for the particular OS with some functionality and productivity limitations, but time and spendings can be significantly reduced. To know more details and specifics of those approaches, you may read our article about mobile app development. However, if a young entrepreneur decided that he or she wants to have the most reliable and smooth work of the app, a professional and narrower programmer has to be hired.

Swift or Objective-C: which programmer to hire?

Actually, it’s a too blurred question a startupper can ask when seeks for an iOS developer. Of course, a particular case can require an engineer with knowledge of only one language, but it’s not the most perspective way to deal with Apple OS. Objective-C was introduced much earlier than Swift, which means that most of the old iOS-driven applications were built via Objective-C. Swift was introduced in 2014 and is compatible with the base made on Objective-C, while it’s a more comfortable and stable language to create applications for iPhones and iPads.

If an entrepreneur needs upgrading or maintaining iOS software created on Objective-C, it seems that a highly-specialised programmer is better. However, new trends are mostly related to using Swift, so smooth changes and readiness for the future is not a wrong decision. From the contrary, making an emphasis only on Swift as a progressive tool to build Apple OS also has drawbacks. Thus, a true iOS programmer has to know not only previous versions of the same language but be ready to deal with compatibility issues of other apps designed on another language. That is why Orange Sputnik finds the best iOS developers that know both programming languages for coding Apple gadgets.

Are there any differences in developing apps for iPhone, iPad and Apple TV?

The only differences that may disturb an employer are related to the experience of the iOS programmer. The same principles, language, and tools can be used for all those products. There are some different features that every Apple OS engineer has to know. For instance, for iPad one has to prepare PencilKit or multiple windows usage, which is not so needed for iPhones. For Apple TV resolution requirements are higher than to portative devices. Although, an iOS programmer has to understand technical differences related to different CPU, GPU, RAM, Screen Size and more, which vary depending on the model. However, those aspects are not new for experienced programmers.

“Orange Sputnik twice reduces the time for hiring a developer, while maintaining spendings are about 50% lower compared to keeping a worker in a local office”

What Factors effects the Cost of iOS App Development?

Actually, the cost of an iOS app can vary from a few thousand dollars and up to a few million in the same currency. Not the best answer, to be fair. It only means that numerous factors influence the cost of the mobile application for Apple products.

Factors that influence the price of iOS app

Rough calculations of the iOS app cost
for a startup

Despite the fact that it's impossible to state the precise number before hours of discussions and project planning, some financial assumptions can be made. In the following table, we broke the difficulty of the tasks into four categories and calculated the price of the developing part only. Thus, simple applications can be made by junior and middle-level programmers, while for harder tasks, we took more experienced coders.

Another vital aspect is understanding that a well-functioning application requires other team members. Easier programs require only a few additional (except a developer) participants like part-time QA or project manager. The most complicated ones need full-time project managers, a few developers, regular feedback of testers and front-enders. It means that the numbers from the table below should be multiplied by 2 or 3 for simple apps. At the same time, the most difficult ones should be increased by five or even ten times.

How much to pay
an iOS mobile developer?

The popularity of mobile technologies accelerated the demand on appropriate developers, which increased salaries of those programmers. Those who code Apple products have a quite special status due to the reliability and limited series of products they support. The spreading of open-source Android covers a bigger number of devices but dictates harder conditions to earn more stably. Although, those who have already bought an iPhone or iPad, he or she is usually ready to pay for extra functionality, what makes App Store a reliable place to increase real sales.

All those factors allow iOS developers having stable wages across the world. Traditionally, Western Europe, Australia and Northern America are the best places to work on Apple code. Eastern Europe, Asia, and South America have lower rates of average salaries and look as perspective destinations to find iOS programmers for low-budget startups. Appropriate numbers are presented in the chart below (source: MindK): 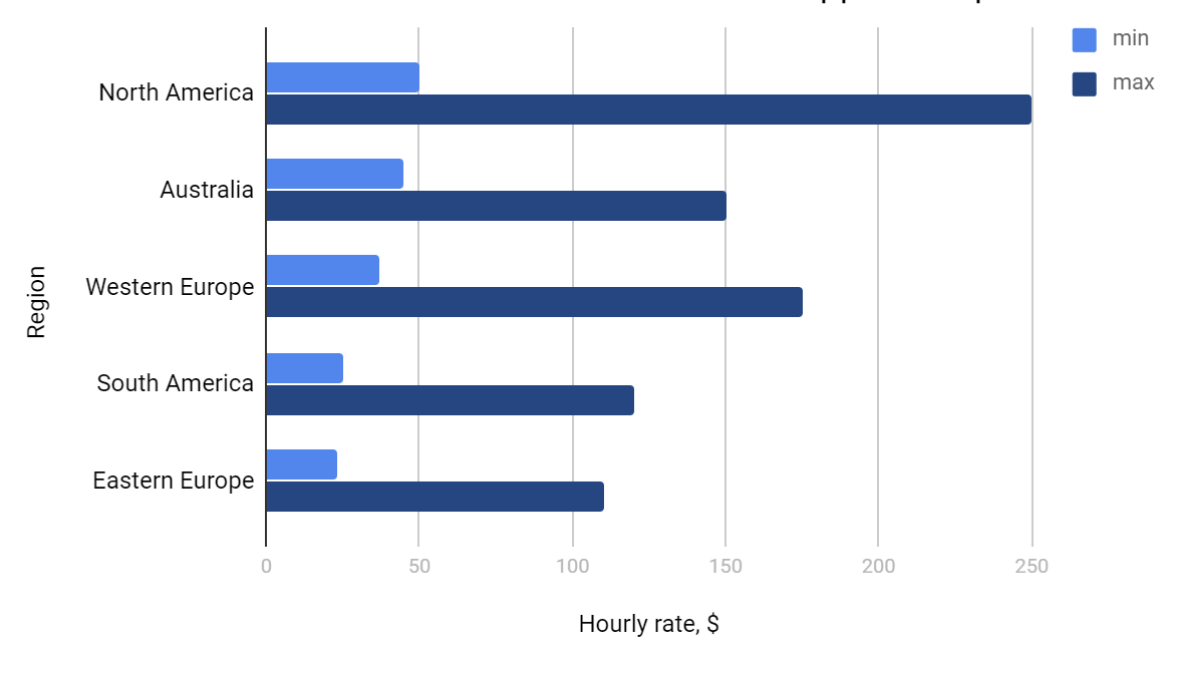 What relates to the numbers in particular countries, the situation is also predictable. Leading states like the US and Israel present places where iOS developers can earn, starting from $50k and up to $100k+ annually. The situation across the EU is somewhat stable, where Apple app programmers are receiving from $30k to $60k+ per year. Ukraine, as a representative of the progressive Eastern European region, is a place where iOS engineers make from approximately $12k/year and up to $36k+/year. Average numbers across countries are presented below: 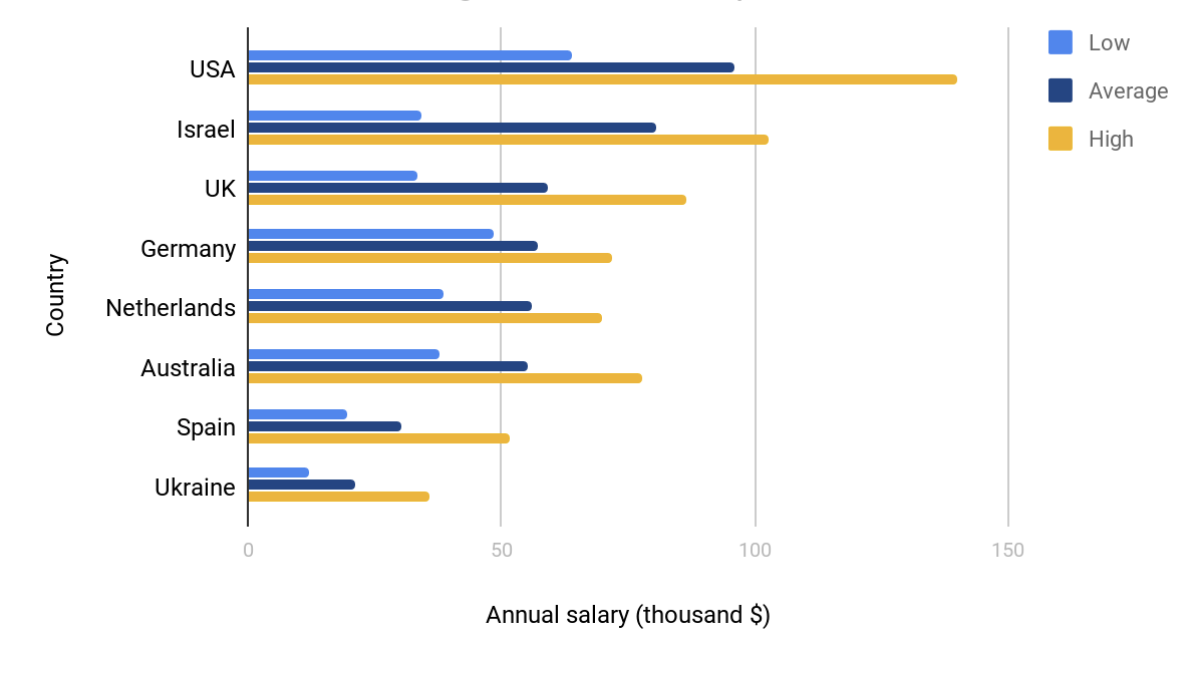 However, the salary rate is not the only aspect that influences choosing an iOS developer. Thus, a few factors have to be always present in the mind of a startupper or young entrepreneur who decided to hire a remote Apple coder:

There are no doubts that the cheapest variant for a startup is finding a freelancer, but far from the most effective. As a rule, reliable freelancers are busy, so choosing an unoccupied programmer is some kind of a lottery. Outsourcing does not guarantee the full dedication of the developers to your project, which is not the best news for long-lasting plans. Staff Augmentation can be a suitable variant for those who want to save money but quickly receive engineer (hiring takes a few weeks only) with the quality and dedication of an in-house developer.

Orange Sputnik is more than eight years on the market, which allowed us to collect enough data for our own statistical charts. We divided all the programmers into four experience categories with mentioning minimum and maximum rates of iOS coders. The chart below shows ‘how much will cost Ukrainian iOS developer for a startupper?’ if he or she relies on Orange Sputnik: 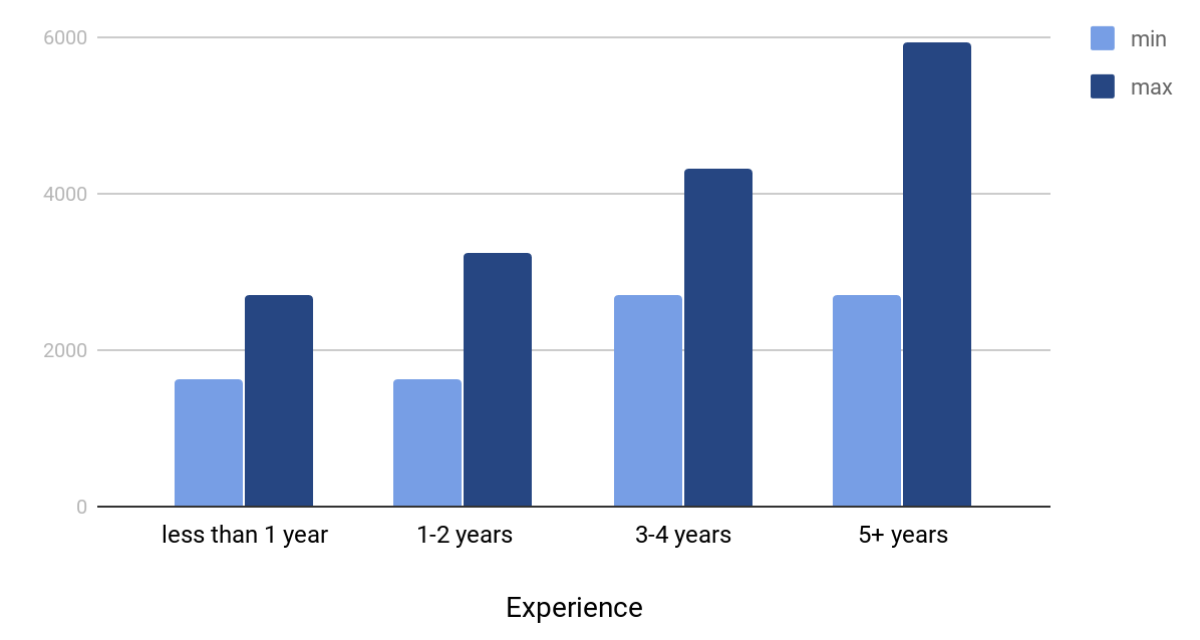 One has to understand that those numbers include all the distracting details of keeping Apple programmer: cosy office, modern equipment, wages and taxes, retention practices, and even a hiring cost.

We tried to review all the details that take place when seeking an iOS developer. There are plenty of aspects that were not mentioned as they are too specific to include them in the article. If you still have any questions, feel free to contact our managers, who will be glad to help you in finding the most appropriate iOS programmer.