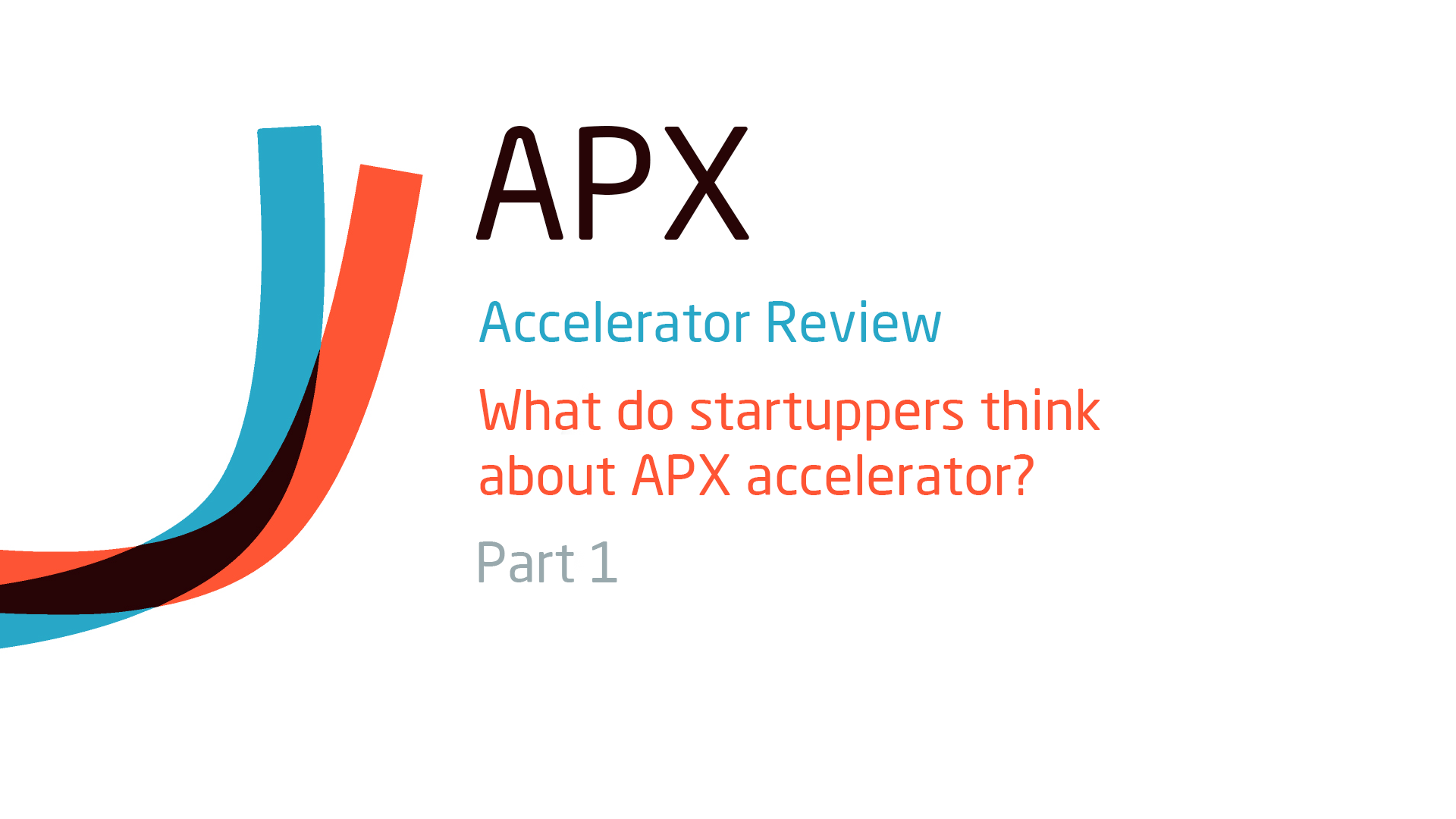 We continue the section of Startup Accelerators. Today it will be a review of APX. This Berlin-based company helps young entrepreneurs in their intentions to conquer the world. Amid their primary features are experience in this field and financial help to newcomers. Thus, they give to those who entered the program 50k euro and take 5% equity. For most startuppers such conditions are beneficial as lack of revenue in the first stages is an unbeaten obstacle even for prospective businesses.

Another interesting and useful element relates to the individual approach APX apply to their startup students. They do not require regular participation in lectures and workshops, but more focused on personal tasks. For instance, if the entrepreneur is good in the scope of the technical side of the product, they giving knowledge from other fields that are also necessary for startup success.

What do startuppers think about APX?

Actually, there is no need to expand APX’s presentation as it is available on their website. Moreover, every case is individual, and everybody is looking for something he or she precisely wants to obtain from the acceleration program. We’ll better share with the reader reviews of real participants of these companies, which are unique and can be useful for other startuppers.

“We had enough contacts to rely on, but they helped to build soft communication”

Idea: “Individual and Flexible Delivery of Cargoes up to Doorsteps”

The desire to compete for delivery services with the opportunities of a local startup looks almost unreal. However, the instance of Ville Heimgartner and his teammates shows that it is possible even in the country with developed services like Germany.

“We help EU retailers to send packages in time, collect parcels from warehouses and so on. Imaginecargo makes the primary emphasis on the most convenient time and delivery conditions and try to accomplish such elementary steps like notifications and to give the package at the doorstep with better quality. For example, a client can change the time of delivery due to unexpected circumstances up to the almost last minute.”

How does APX help in achieving goals?

According to the interviewee, the role of APX was huge in accomplishing those elements at the highest level. “We had some basis before joining them.  Among the primary goals were an increase in investments, portfolio improvement, and expansion of the network. The desire to get everything online and raise the company on the next level also forced to join them.”

“They gave precise answers and assistance. I really appreciate the work of a dedicated team that was helping us.”

The issue of networking is one of the essential to startups, and here the grateful tone of Ville became even more appreciative. “We had enough contacts to rely on, but they helped to build soft communication. You know that is vital in business, as it’s hard to build something valuable on frosty relations.”

One more positive side of APX was mentioned right after that: “we came with suchlike specific problems, and they gave precise answers and assistance. I really appreciate the work of a dedicated team that was helping us, including legal issues and preparation for pitching.”

Looking at the progress Ville and his team made during the last year, one can start believing in the dreams. Donald Trump once said: “As long as you’re going to be thinking anyway, think big.” Combining the regarded case and words of the 45th American president, the idea to compete worldwide delivery giants does not seem impossible, and it really motivates and inspires.

“We received a massive push to our idea in terms of expanding a client base. They were actually our first clients.”

The idea of remote work isn’t new at all, and the job on distance now looks like an ordinary opportunity when the talk is about cooperation in the digital sphere. However, Boris Borisov and his partners organized this kind of collaboration on the highest level.

“All co-founders of this platform are developers and understand all the hidden obstacles and pain of software engineers in terms of remote work. So we did not only build a website where specialists and companies can find one another, we created a place of credible meetings with minimum time spent on it. We are actively expanding the list of companies that ready to hire remote software developers and thoroughly check profiles of both sides. In practice, it means that one or a few contacts between the sides is enough to provide a deal.”

The reasons to join an accelerator are usually quite the same, but not in this case. “We were looking not only at funding conditions; we were looking for help in networking. As APX has tight contacts in Germany, we received a massive push to our idea in terms of expanding a client base. They were actually our first clients (smiling).”

‘Individual’ is better than common

Boris enjoyed an individual approach during the program in all the meanings. “We had only specific meetings with needed specialists instead of general lectures. They did not possess a technical consultant who could help us with advice on the software level, but they found an advisor in a few weeks.”

“We had only specific meetings with needed specialists instead of general lectures.”

The question about the benefits they received after participation was perceived calmly, while the serenity of the voice showed that Boris understands and appreciates the help they received. “We did not have revenue before joining the program, but now we have. We also expanded our staff, number of clients, and upgraded a website. It definitely worth it.”

It seems that this case is wholly about the desire to find opportunities and a deep understanding of the subject. Our interviewee is a software developer himself and who can better know what are engineers like him looking for? Probably, about people like Boris Thomas Edison said: “If we all did the things we are really capable of doing, we would literally astound ourselves.”

“Give them a list of companies you want to be connected with, and you’ll receive a warm contact with the speed of flashlight”

Idea: “Help in defining the best place for remote work, coworking in the prime locations.”

Startup idea and accelerator location can be tightly related

A robust temp of globalization makes it harder to create something totally new, but startups appear even quicker and grow faster. One of the explanations of such a phenomenon can be a phrase of famous entrepreneur Victoria Ransom who said that ‘even if you don’t have the perfect idea to begin with, you can likely adapt.’

Doron Faibish shows how adaptation should look like in practice. “When we were choosing the accelerator, numerous factors were analyzed. Devidiness, openness, diversity of solutions, and success stories were only part of the decision. Our idea to use prime hotels as perfect coworking and remote workplaces could be best implemented precisely in Berlin. There is about half a million freelancer in the German capital, the deployment of hotels is comfortable, while transportation is perfect. So, Berlin-based authoritative accelerator APX was not an accidental choice.”

How does the acceleration process build?

However, analysis is vital not only at the starting point, and Doron explained it clearly in a few words. “Even though there are enough basic workshops, everyone can choose additional ones if he or she wants. The responsibility of finding problems and gaps in the startup lies mainly on the owner, not on the accelerator, and such an approach motivates to think faster and more effectively.”

“The responsibility of finding problems and gaps in the startup lies mainly on the owner.”

Nevertheless, it doesn’t mean APX has no duties or is not interested in the success of the startup. They try to choose those who understand the pros and cons of the idea and assist them. Free office space, flexible mentoring, and rapid help to the issues that appear during the program are cornerstones of this German company.

“Give them a list of companies you want to be connected with, and you’ll receive a warm contact with the speed of flashlight. Do you want to prepare to pitch well? Attend their ‘pitch Tuesdays’ and try your forces in front of 100 people with further detailed feedback. That is a tough experience, but really helpful.”

Try to be versatile

The question about the strongest sides of APX showed why Doron has a successful startup. “Diversity. They accept people from various countries to their team; those people are from different cultures and provide diverse feedback. Being an entrepreneur, it helps to prepare a product to different points of view, and it is precious.”

“APX pays the primary attention during acceptance on the idea, drive, and people, especially on how the team sees strong and weak points of the product”

Idea: “New generation social media, where polling are both exciting and useful.”

Social media have already become an inevitable part of human life, and the race still continues. There are 8 social media with more than 300M users, while Facebook and Instagram possess 2+ and 1+ billion, respectively. However, Dominic Ivison decided to join the competition and suggested a new one which is built around the idea of polling only.

“We are promoting a new social opinion platform, which is a representation of the next generation of polling that help. We made it joyful and even helpful if someone needs to make a choice. ThisThat app differs from Facebook polling as one-stop for canvass, which also includes various features. It is a narrower usage of social media like Snapchat for private messages, Instagram for photo sharing, or TikTok for short videos. We hope to gain this niche as one more specialized app in the smartphone.”

Although Dominic and his team were based in London and got some investments there, joining APX brought several benefits. “After researching startup accelerators, we decided to choose APX. Relocation to Berlin looked sacrificing, but then we did not want to leave this place. As there wasn’t enough funding for further improvements, this deal boosted us significantly.”

However, Dominic made a particular emphasis on the quality of help they provide. “Even though you do not choose mentors, the whole team helps you and creates a reliable tailormade project. Moreover, Porsche and Axel Springer cooperation allow building a good analytics platform, so they used strong web-based analytics to help us. After the participation, we increased the number of active users, reduced the number of technical issues, can think out of the box, and became much more confident in pitching.”

“After the participation, we increased the number of active users, reduced the number of technical issues, can think out of the box, and became much more confident in pitching.”

A hidden warmth towards people and their importance in the work that was made by Dominic seems to be exciting. “As for me, APX pays the primary attention during acceptance on the idea, drive, and people, especially on how the team sees strong and weak points of the product. It is rather common to Marc Benioff’s phrase that ‘the secret to successful hiring is this: look for the people who want to change the world.’ I hope they saw precisely that in our team.”

Nevertheless, even after the program, Dominic and his team are still looking for financial support. We hope that they will receive what they are looking for so we can come back in the future with the question about the role of people in their project. Or, maybe, we will just create a poll about it and receive a global answer? 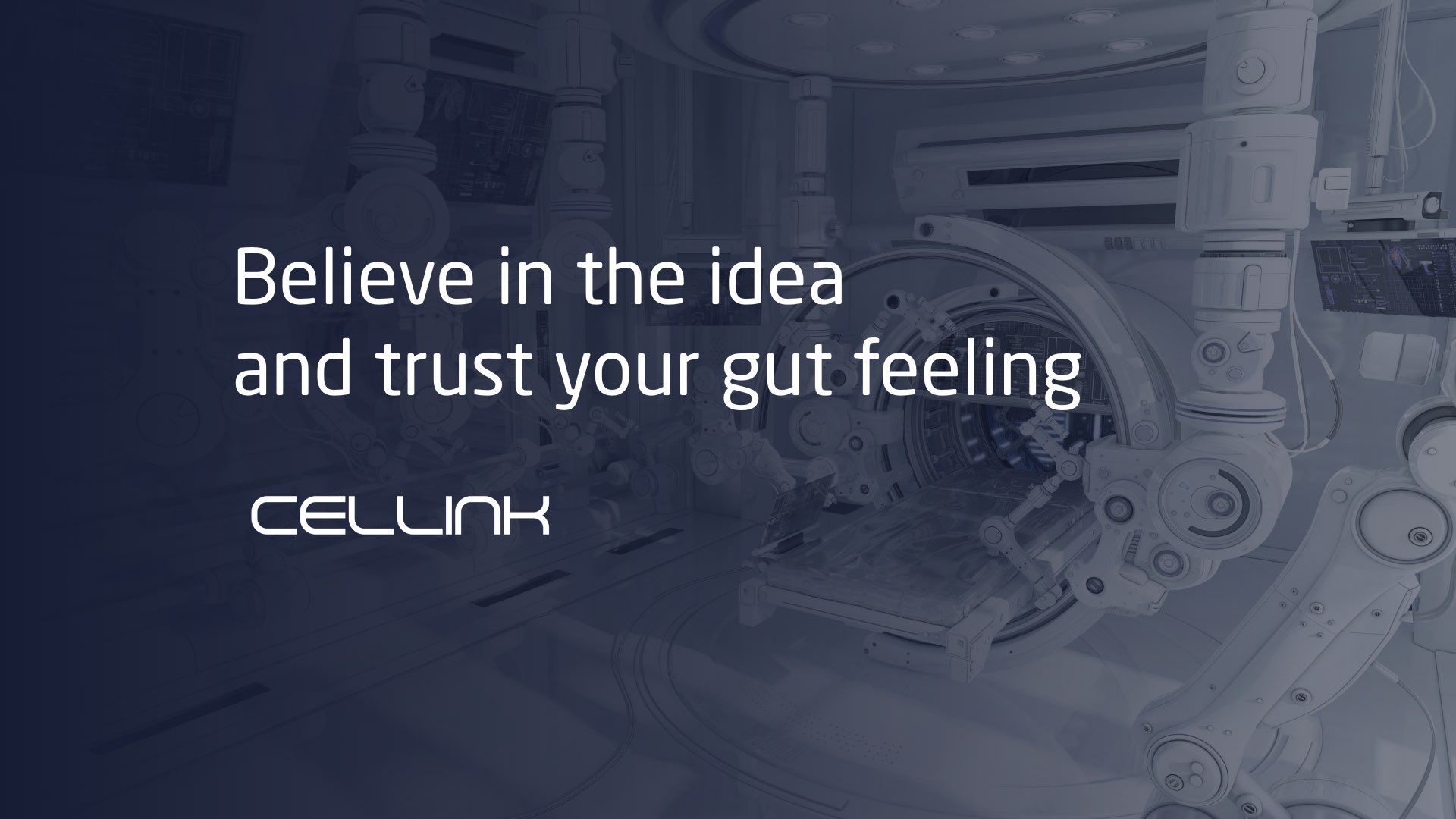 Believe in the idea and trust your gut feeling 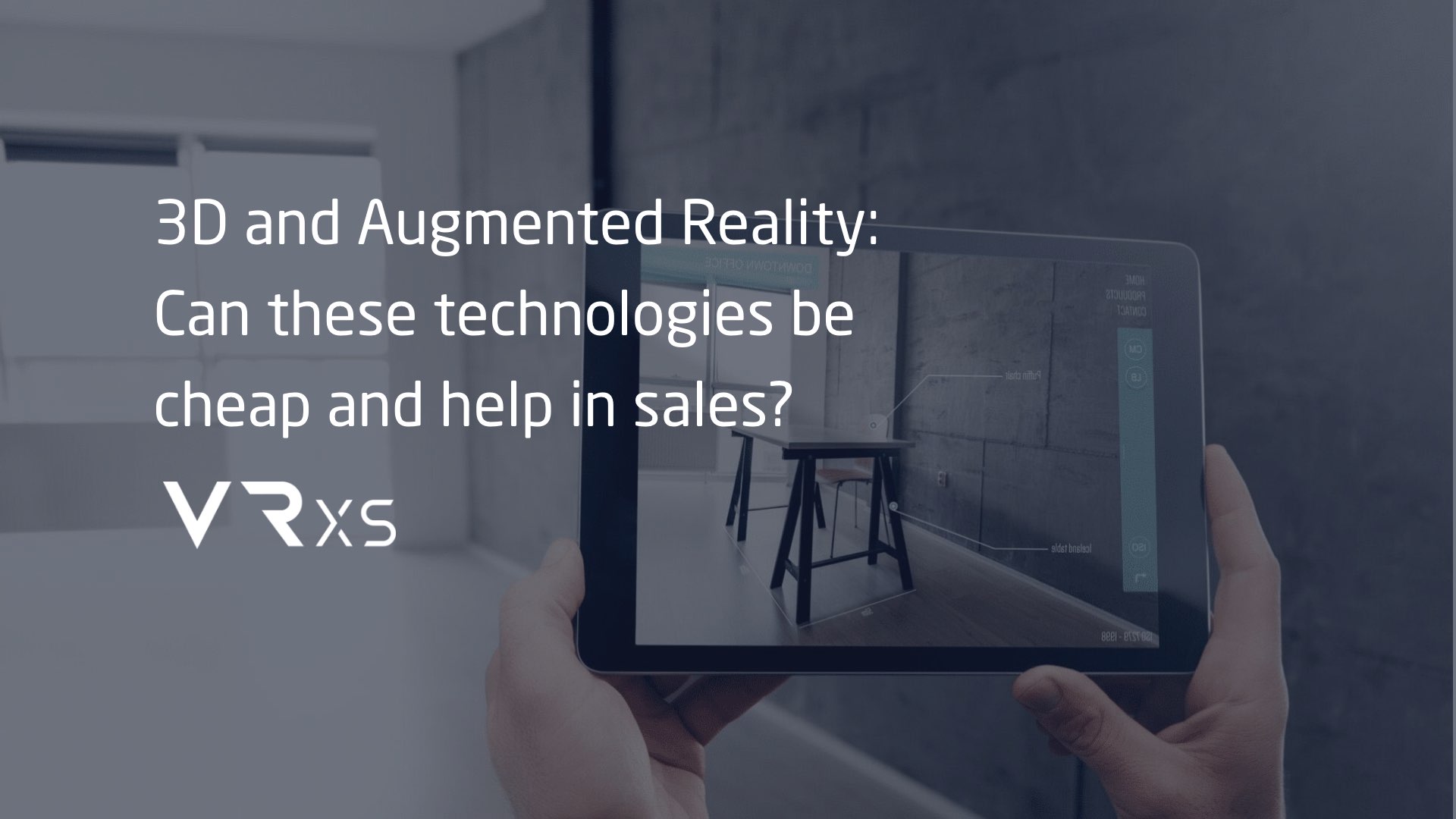 3D and Augmented Reality: Can these technologies be cheap and help in sales?